Living in Southern California, there’s no shortage of great food. I enjoy my share of seafood tacos & carne asada fries (not to mention the bevy of award-winning chefs). Yet, there remains a void in my southern-rooted, food-loving soul—earmuffs San Diego, EARMUFFS!

Growing-up with meals like pork chops & black eyed peas, I have a deep affinity for southern classics. One of my favorites is undoubtedly shrimp & grits. It’s perfect, I promise. If you’ve never thought of a grit as anything other than coarse asphalt, then I assure you this is an edible victory (ground corn + broth + butter + cheeses = success)! If a meal could be a hug, well then this would be it. My Mom loved shrimp & grits, and so do I. Preparing it is pretty easy. The longest steps are the ever-cumbersome shelling & de-veining of the shrimp <insert glass of good wine here> and making the roux for the sauce. If you can find the fresh shrimp pre, de-veined & peeled, I say do it (but keep that glass of wine).

Let’s make this—we’re overdue for a little soul-warming aren’t we?

Save Print
5 from 1 reviews
Shrimp & Grits
a southern classic 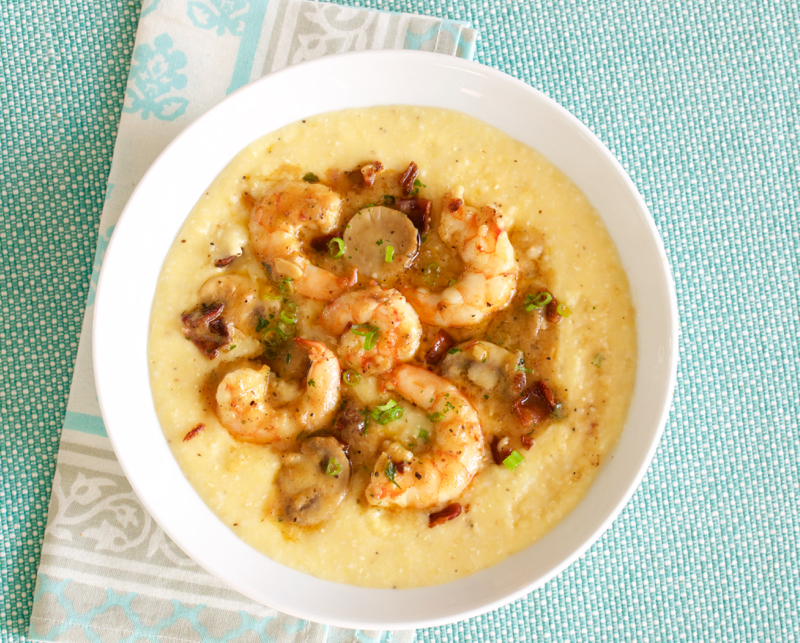 Serves: 4 servings (20 shrimp)
Prep time:  25 mins
Cook time:  30 mins
Total time:  55 mins
What to get:
Grits:
Shrimp & Sauce:
What to do:
Cook Shrimp:
Start Grits:
Make Sauce & Finish Meal::
Notes:
This is fairly easy, but have to be careful not to overcook the shrimp and if the sauce requires more or less broth, adjust accordingly. More fluid can also be added to thin the grits as desired, and they can be made a day ahead and reheated on the stove with extra broth to save a step day-of. Increase heat level with more cayenne and/or serve with hot sauce or tabasco sauce.
Wordpress Recipe Plugin by EasyRecipe
3.5.3208

Shrimp & Grits are as old as the south itself, but the dish’s resurgence in the early 1980’s plotted it’s stay on the culinary-canvas of the region (and the nation), indefinitely. It’s satisfying, savory, forgiving, and welcoming of different flavors, whether it is creole with Andoullie sausage & peppers, or Charleston-style with a tomato-base. In Georgia, this is a very common brunch dish, adorned often with fried eggs, or mushrooms and veggies, over cheese grits. That’s the base I’m most familiar with, and have adapted my family’s recipe from. I hope you enjoy this special meal as much as I always will.