On most mornings this time of year, I’m awakened to the melodiuos chirping of birds preparing for spring. However, this season (at roughly 3 A.M.) my slumber’s been suspended by one of the loudest birds my ears have ever encountered. By the fourth sleepless night, I decided to venture outside to handle the issue (i.e. make pointless verbal threats at a tree). Flashlight in-hand, I prepared myself to face what must be a 15 foot sparrow with a bullhorn—I cannot rationalize anything else capable of such volume. To my relief I startled two finches, furiously fluttering about. As I drew closer, I realized they were intently building a nest in the eave of my roof (apparently they’re on the night shift). Though I was dismayed for the audible interruption, I was happy to see spring in full effect! Sometimes little moments like this provide inspiration, and I’ve been needing some in the kitchen. I make a variety of spring & Easter recipes, and sometimes grow tired of the same deviled eggs and ham. Thanks to my little songbirds, I decided on a new brunch recipe this year, Easter Egg Hash Brown Nests with bacon & cheese—you didn’t think I’d skip bacon on a holiday did you?

Betty Crocker has a recipe for these that’s been around for years. Theirs uses boxed potatoes, but I decided to create a version using fresh potatoes, parmesan, eggs, havarti and maple bacon. Breakfast all in one bundle! I think these would be great for an Easter brunch alongside virtually any dish, and we only need a few ingredients.

Save Print
5 from 1 reviews
Egg & Hash Brown Nests (bacon & havarti)
All the breakfast flavors you love, in one dish! Muffin tin egg nests are a great brunch or breakfast alternative. 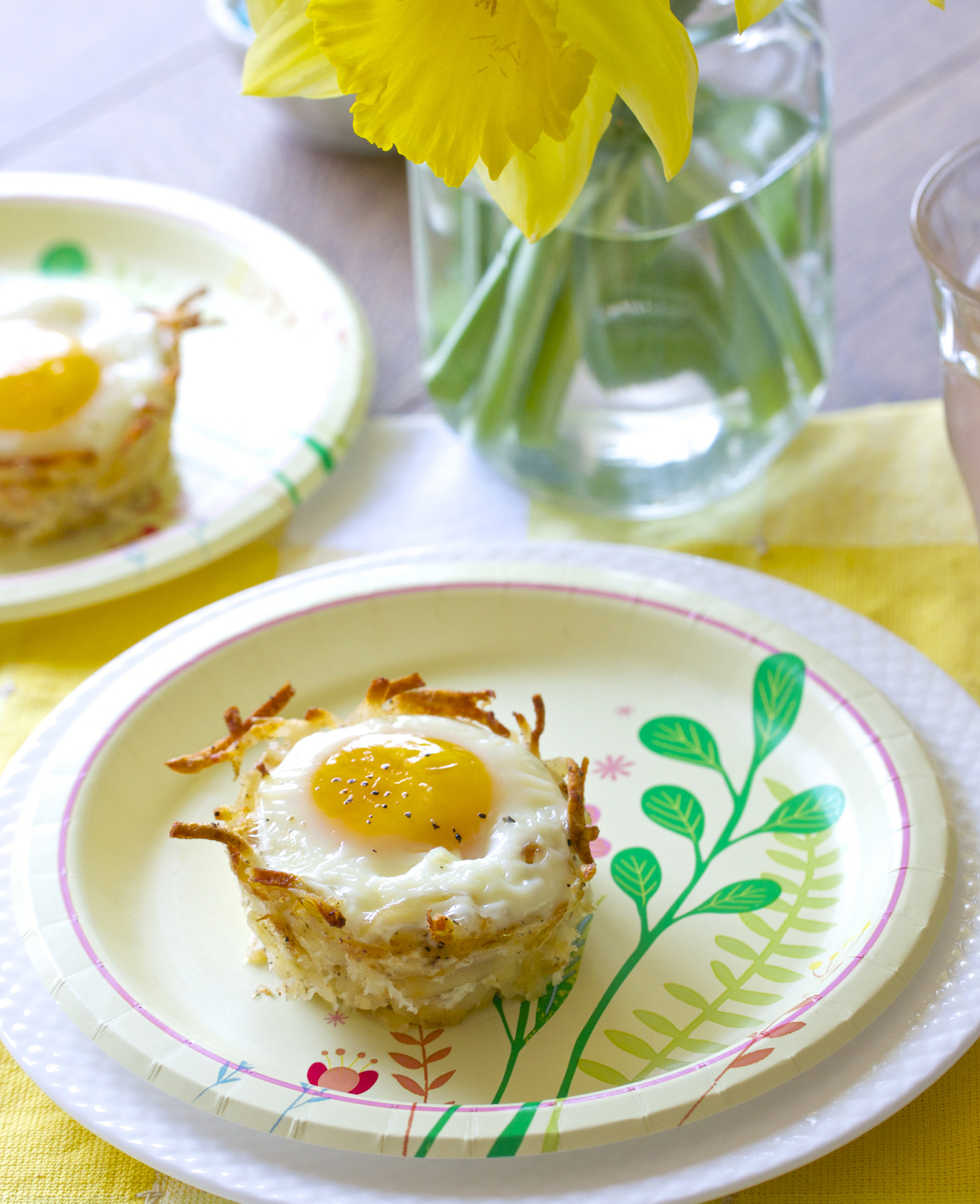 Serves: 6 egg nests (one 6-well muffin tin)
Prep time:  25 mins
Cook time:  15 mins
Total time:  40 mins
What to get:
What to do:
Notes:
This recipe is easily doubled. Depending on the amount of moisture in the shredded potatoes you’re using, your cooking time to brown the nest will vary. I use a bag of fresh hash brown potatoes, pre-shredded at the store (refrigerator, dairy isle). These are easy and time-saving. Otherwise, you can shred russet potatoes, peel & grate for hash brown-style potatoes (in the latter case pre-baking the potato slightly helps with shredding, or use food processor attachment). Frozen variety have too much moisture so I never use. Make sure you spray oil the muffin tin really well, so the nests do not stick when removing from pan to serve. Continue to bake just the hash browns initially to achieve a golden brown nest (vary temp accordingly, avoiding scorching them). With one batch I began to see bubbles forming in the cooking egg white, so I used prong of a fork to dissipate them.
If you prefer your yolk to be firm & cooked-through, simply bake a longer, I prefer runnier yolks, so I just watched the egg closely as they cooked. Also, any cheese will work here!
Wordpress Recipe Plugin by EasyRecipe
3.5.3208

This took me a little trial & error at first. Initially I mixed melted butter with the potatoes, which resulted in a greasy not-so-nest of hash browns. By omitting the butter and raising the oven temp, I was able to get these little guys golden before the egg was baked inside. You could really use any cheese, or any additions for that matter—I’m planning to try proscuitto and spinach next time. I love that these are portioned for single servings, which couldn’t be more perfect—and festive—for this weekend’s Easter brunch.

May you enjoy the many gifts of this season, especially in the kitchen!