What do you get when you combine green beers, crowds of green people, and shots of green whiskey (besides a large headache tomorrow)? That’s right, Saint Patrick’s Day! I cannot believe the time is already upon us. Last year we celebrated in the kitchen with delicious boxty and finished the evening with Irish coffee (throw in a couple pints of Guinness somewhere in-between). My family is part Irish and that’s a good enough excuse for me join the festivities. Though I may not be parading around my city dressed like a leprechaun, I do attempt culinary creativity, and this year that involved some good ole’ potatoes! A staple since the 1700’s, potatoes fueled the Irish population daily in many variations. Though we’re not serving ours alongside corn beef & cabbage, nor in our Guinness beef stew. but instead a savory version of Irish Nachos. We’re topping our taters with some Guinness caramelized onions, jalapeños, Irish porter cheese, Irish aged cheddar, and don’t forget the bacon. This is one skillet sure to soak-up all of the stout at the end of the night. We can skip the crowded pub, and indulge at home with a helping of these:

Save Print
5 from 1 reviews
Irish Nachos (& Guinness Caramelized Onions)
You don’t have to have tortilla chips to enjoy nacho goodness! The dinnervine is using potatoes for this take on Irish Nachos loaded with toppings like our guinness caramelized onions, Happy Saint Paddy’s! 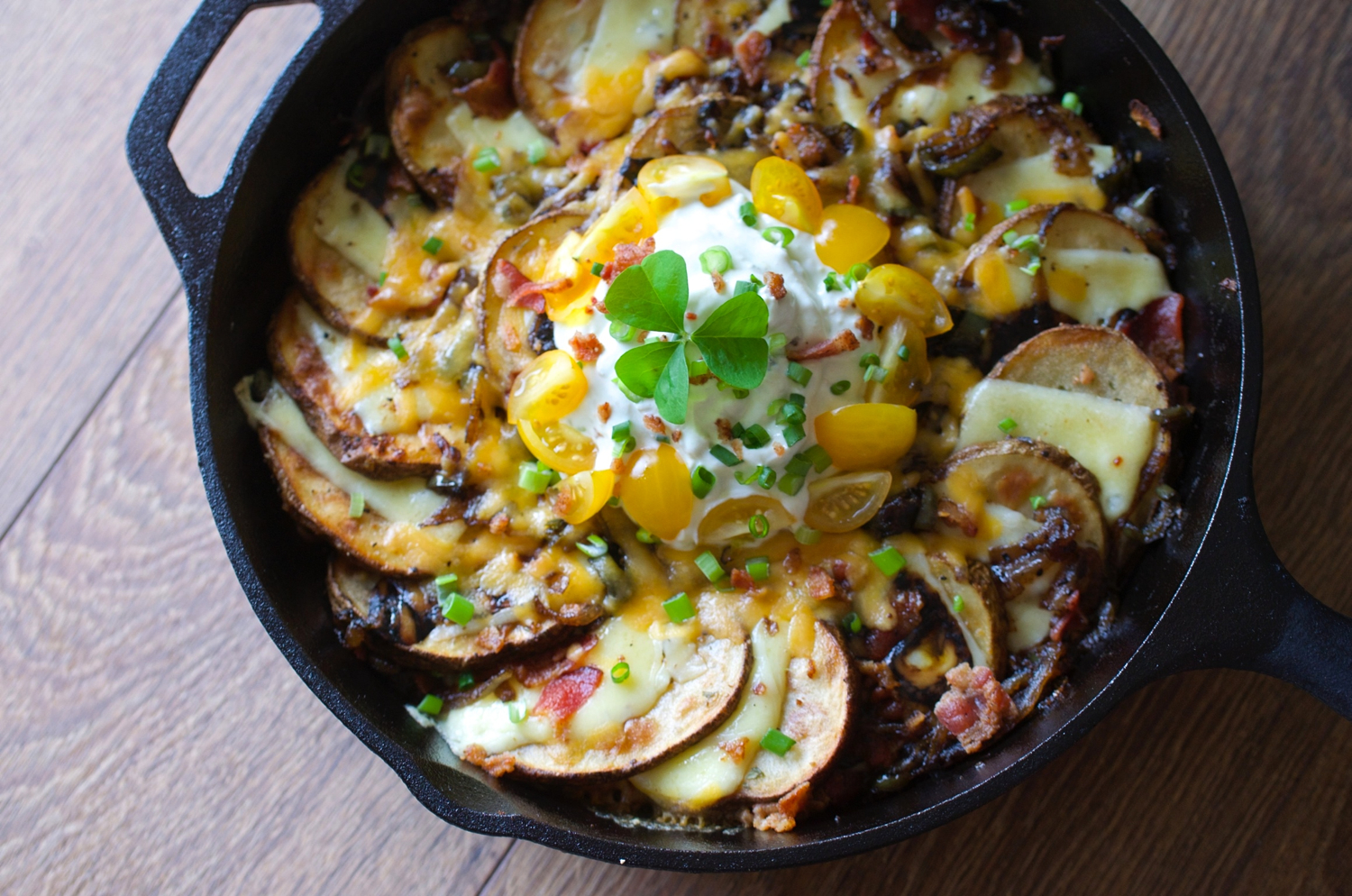 Serves: large skillet, enough for several
Prep time:  10 mins
Cook time:  30 mins
Total time:  40 mins
What to get:
Seasonings for Baking Potato Slices:
What to do:
Notes:
You can fry the potatoes in oil if you prefer, but I prefer to bake. The texture of the potatoes are still soft with a firmer crisp edge, depending upon how thick you cut your potato slices. You can use any cheese, but I had a nice block of aged Irish sharp cheddar to use! The porter infused cheese was very good, but if you don’ find one, I would just add more shredded cheddar. This is best served right away, and you can add hot sauce or salsa to spice it up further!
Wordpress Recipe Plugin by EasyRecipe
3.5.3208

These are indulgent but very delicious. To be true to my Irish roots, I selected an aged Irish sharp cheddar, and also came across a tangy Irish porter cheese. The rich Gunniess is the perfect addition to help caramelize our sweet onion. We also add some jalapeño for a kick, and top with crunchy bacon, sour cream mixed with fresh avocado (green is the thing today), chopped green onions, and some fresh pear tomatoes. Hot sauce would also be a nice add-on. By oven-roasting the potatoes in herbs & fresh garlic, we’re infusing our spuds with maximum flavor (and we wouldn’t want it any other way on this holiday).

So raise your pints up high! May you be lucky in good drink, good food, and good company!