I’ve been to France, and have to say I enjoyed much of the country & cuisine there. To be honest, I fell hardest for the most stereotypical dish one could think of—a savory bowl of French onion soup. Maybe the soup was my favorite because this was my first time ordering it (better late than never). I have no good reason, other than something always seemed unappealing about plain onions in broth. Well, until I finally had some—It’s DELICIOUS!

Since my soup epiphany, I’ve sampled a myriad of versions state-side, with mixed reviews. I don’t crave soup often when it’s hot outside, though recently I’ve been buying a surplus of sweet summer onions. As luck would have it, Vidalia onions are making their coveted appearance on the West Coast, hooray! Being that I’m a Georgia girl by birth (and heart), I love a good Vidalia. In fact, when my family moved to CA, the parentals would have these precious veggies shipped-in! Vidalias are solely grown in Georgia and unparalleled in flavor—sweet & mild. They’re the original ‘sweet onion’ variety, and if you’ve yet to sample one—you’ll be hooked. Only during late spring & summer is this seasonal crop available, so I’ve been cooking with them constantly.

If the onions weren’t inspiration enough, I was recently gifted a cooking torch (jackpot)! Looking to test it out on something other than my candles, this soup came to mind.

Now we have an obscene amount of onions & a can of butane—let’s get this Parisian party started! 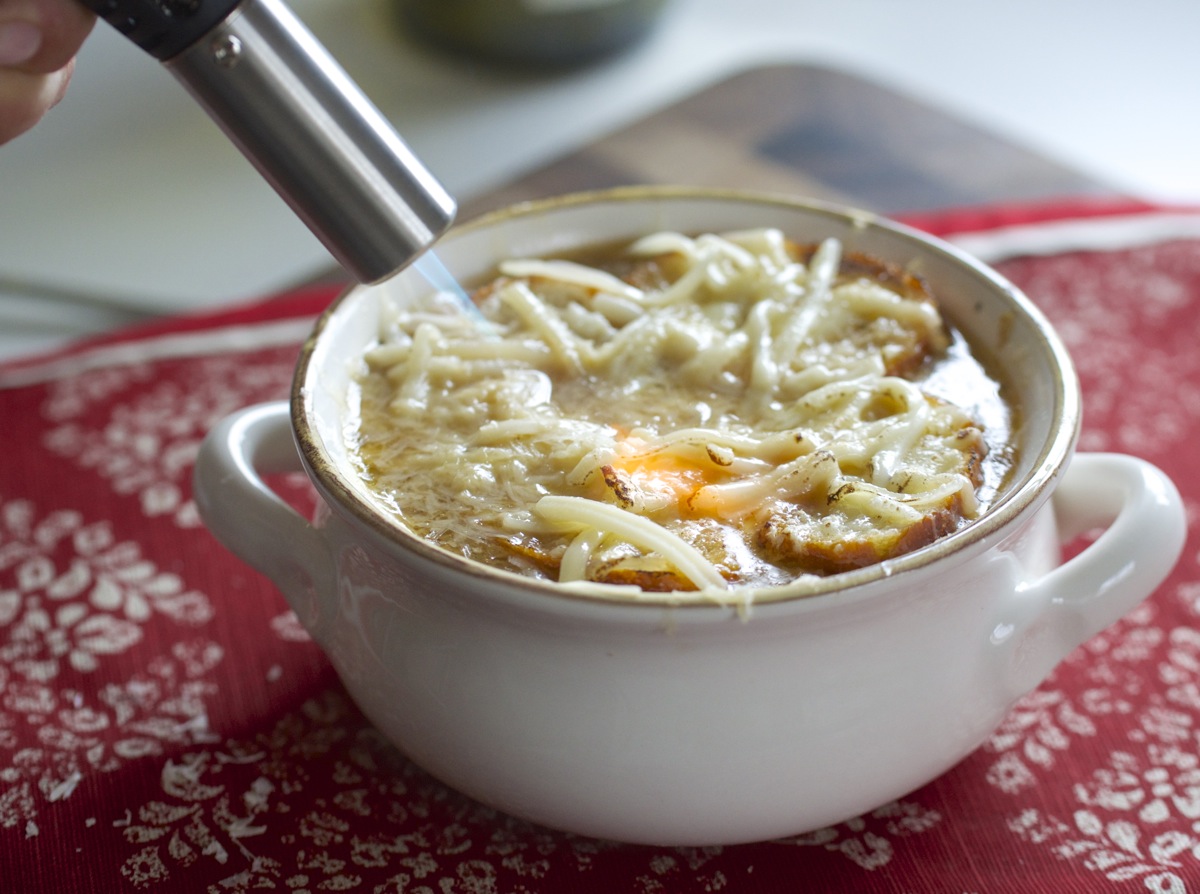 Serves: pot of soup (4+ dinner size servings)
Prep time:  40 mins
Cook time:  20 mins
What to get:
What to do:
Notes:
The time listed to make this is mainly for the time it takes to caramelize the onions (up to 40 mins depending). Prep is mainly slicing onions & chopping garlic. I opted for a pre-shredded Gruyere/Swiss cheese mix that saved some time! Add as much or less liquid as you prefer, but the soup will thicken with addition of cheese & bread crouton. I prefer mine thick/loaded with onions, but you can use more liquid for a less dense soup. A cooking torch makes topping super easy, but an oven can be used to broil the cheese crouton instead!
Serving size: ~2 cups (dinner portion)
Wordpress Recipe Plugin by EasyRecipe
3.5.3208

This recipe takes more time to prep than actually cook. Though slicing onions is the least desirable task, with Vidalias so sweet you won’t shed a tear (unless you get crazy with the butane). Traditional French onion soup is served gratinéed (topped with a big, hot, cheesy crouton) and that’s where our torch came in handy, to melt the Gruyère. You can also broil the cheese & bread directly on the soup’s top, in your oven. I love how the caramelized onions pair with the salty beef base. Our toasted baguette soaks-up all of this flavor, and the bubbly cheese lends just enough richness. I knew this would happen! Even though it’s almost 90 degrees over here, now I want a hot bowl of soup!

Whether or not you’re new to Vidalias, French onion, or torches—I think you too will find this a favorite.