What is your favorite part of the day?

For me it can vary, but dinner is usually involved somehow. A meal seems so inconsequential, but to create a dish and turn it into a social occasion—there’s nothing better this time of year. I feel summer meals should be fresh & light (but not light on flavor). It’s warm out, so this is where I lean on certain ingredients, so I spend less time in the kitchen. I find myself using an abundance of fresh garlic and herbs—like basil—which are aromatic, piquant, and ready to use, as-is. Then you can spend less time next to the fan—baking, roasting, braising, stewing, or whatever else it is you like to do! A recent hot evening & fresh loaf of sourdough, inspired me to create a rustic, skillet-grilled Panzanella Salad, loaded with heirloom tomatoes, butter lettuce, cucumber, and a homemade, herb dressing you could almost drink! It’s zesty, healthy and I love everything about it. Did I mention we’re adding some pancetta?

Making an Italian panzanella is an open canvas (well, minus the obvious bread component). Some resemble a marinated salad with tomatoes and cucumbers, but for mine, I like to use butter lettuce, red onion, capers, alongside colorful vine-ripened tomatoes. The bread is skillet-grilled with a little garlic-infused EVOO and parmesan cheese—to add texture & weight—making this a meal. Pancetta, I add that just because it’s good. For the dressing we make a fresh herb vinaigrette with red wine vinegar, chives and basil—what’s not to love? 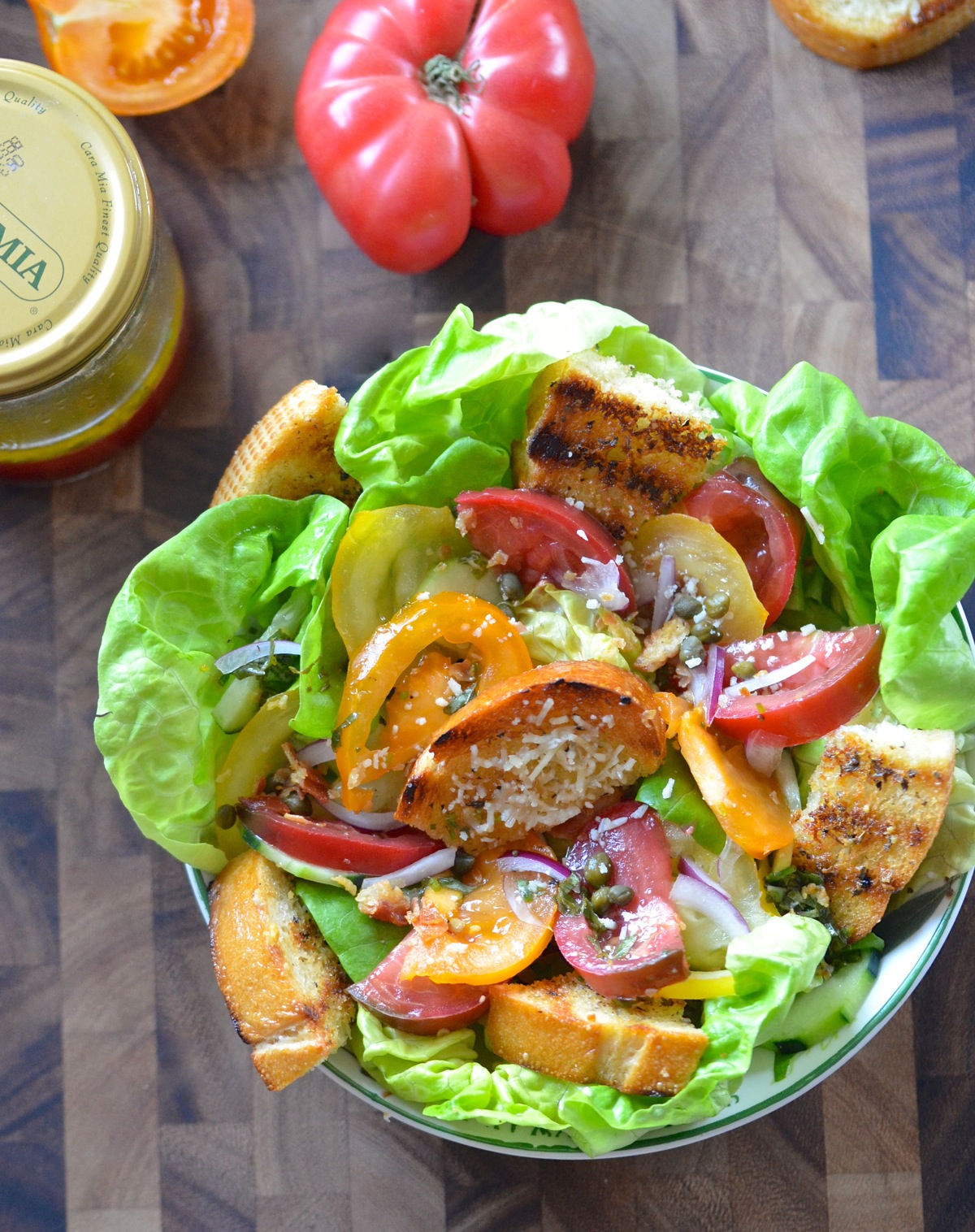 Serves: large salads
Prep time:  15 mins
Cook time:  10 mins
Total time:  25 mins
What to get:
For the Dressing:
For the Salad:
What to do:
Make Dressing (in small jar):
Assemble Salad:
Notes:
This is easy to assemble, but if making ahead, don't put on dressing until right before serving, so bread doesn't end up soggy. Use different colors of heirloom tomatoes and remove seeds and juices from tomatoes as necessary (depending on how ripened they are). Dressing stores best in refrigerator because of fresh herbs, but it will solidify some. Can be left on counter for a couple of days however.
Serving size: one salad
Wordpress Recipe Plugin by EasyRecipe
3.5.3208

I didn’t include exact measurements for the salad portion (recipe above), since you can add as much of each component as you see fit! The capers add a saltiness, so they’re a nice touch, but I didn’t need many since our pancetta is salty also. The bread gets a good toast from the skillet, and absorbs the herb vinaigrette perfectly, so I was pretty liberal with the jar! If you don’t have pancetta handy, not to worry, regular bacon chopped & browned will do just fine, or you can omit entirely for a meatless dish. I was also planning to add artichoke hearts (canned and drained) to this, but realized I was out of stock. Next time, they’ll be in the mix.

This salad can stand alone as a meal, but a smaller portion alongside some pasta, or a protein would work well too. This sure looks and tastes the part, not to mention panzanella is just fun to say! I’ll be making this all summer long, while heirloom tomatoes are ripe and plentiful at farmer’s markets. I prefer to prepare smaller batches of the dressing, so I can use the freshest herbs each time and not have to store in the fridge. The good news is our dressing only takes a couple of minutes, but tastes way better than store bought!

Enjoy this for dinner outside, with some nice Italian wine. I think you’ll like how simple it is to make, and how simply delicious it all comes together!