turmeric, and tinctures, and rhizomes, oh my!

Have you had your Curcuma longa today? Well, If you had a big plate of curry for lunch then you should be all set! We’re talking turmeric here, and it’s more than just a colorful accent to an Indian meal. In fact, I do not even like curry, not any of it. (I know, everyone keeps telling me it’s fantastic, but I’m not on the train yet…)

What have I been missing out on? It turns out, some substantial health benefits & that is why I supplement turmeric daily. I usually opt for a liquid version if available, such as an herbal tincture.

Turmeric is a perennial herb native to South Asia, distinguishable by its long, orange roots, which result in a rich, golden-colored spice. Also known as ‘Indian Saffron’ turmeric is a major player in mid-Eastern and Asian cuisine, and I’m sure you’ve had a yellow curry over rice, boasting healthful amounts of it at some point. From a culinary standpoint, turmeric has a very distinctive, earthy flavor and I do not get around to using it often. Though, it does lend such a deep, golden color to rice & stir-fry dishes that I will add it to my pan from time-to-time. As an herbal supplement I am a big fan, and here is why…

There are several, but I take it for it’s anti-inflammatory & anti-cancer properties. More comprehensively, turmeric possesses valuable anti-arthritic, anti-inflammatory, antibiotic, & anti-oxidant properties, in addition to being a widely-used digestive aid. As an anti-inflammatory, turmeric helps inhibit blood clotting by blocking prostaglandin production, thus making it an effective agent in increasing circulation. MD Anderson Cancer Center out of Houston has performed research to support turmeric in this light. As an anticarcinogenic, turmeric has been initially shown to reduce tumor size by suppressing cancer-specific cells. At the University of Texas Med Center out of Galveston, turmeric is showing positive results in addressing colorectal cancer, but is also linked as a potential aid in breast Cancer. Sounds good to me!

Where do I get me some golden T? 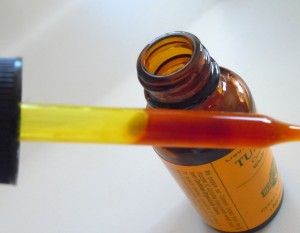 Any health food store. I got my organic tincture at Sprouts, but you can find at Pharmaca or Whole Foods too. The active constituent in the turmeric supplement is Curcumin, and it is extracted from the plant rhizome. A tincture roughly means a liquid herbal extract with an alcohol base. If you can find low alcohol, or alcohol free tincture, I strongly recommend, then it will taste less like burning. Dosing for my tincture is 30-40 drops (1-4 times daily) in a liquid, and I don’t recommend in water, but juice instead. Just because the turmeric is pungent in both taste & aroma, but it’s not horrible, I swear! It’s also quite concentrated in color, so I also warn about accidentally getting it all over your hands & clothes. Well, unless you don’t mind looking like you lost a fist fight to a highlighter. I’m speaking from personal experience here unfortunately…

I add mine to a morning Hodge-Podge drink of Amazing Grass green powder, aloe, flax & a slew of other healthy things, all stirred-up in some cranberry juice. If that’s not sounding too palatable, then there are also herbal capsules, hooray!

I look forward to upcoming, published research on new benefits for turmeric, but until then, I’ll be working to find a new-found appreciation for curry in my kitchen…   Slowly but surely.